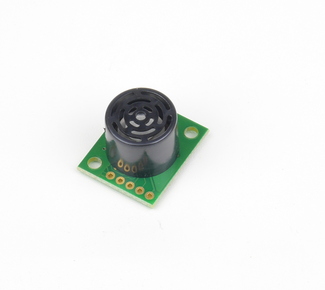 Lowest cost ultrasonic ranger with both I2C and Serial interfaces. New AutoTune algorithms intelligently back the minimum range right up to the transducer ringdown for the very best performance possible, automatically, in the background, and with no calibration cycles necessary. Additional new commands allow for separate burst and ranging control.

There are two operating modes for the SRF02. I2C mode and Serial Mode. This is set with the Mode pin, connected to 0v Ground for Serial Mode and left unconnected (or tied to +5v Vcc) for I2C Mode. These are documented on individual pages. 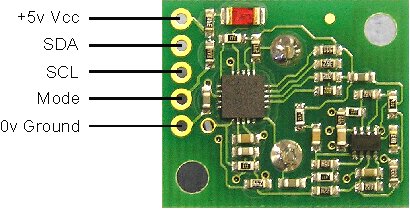 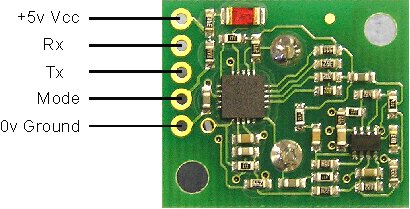 Connecting the SRF02 via USB

Connecting the SRF02 to your PC via USB is this easy. The USBI2C module supplies the SRF02 with power directly from the USB bus. 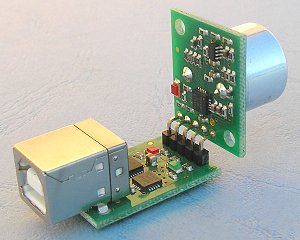 The manufacturers beam pattern, showing the sensitivity of the transducer in db.

This is the measured beam pattern for the SRF02, showing the maximum detection range of a 55mm diameter plastic pipe.

Devatech quotes 3-4cm. It is normally better than this, however so many factors affect accuracy that the manufacturer won't specify anything better than this. The speed of sound in air is approx. 346m/S at 24 degrees C. At 40KHz the wavelength is 8.65mm. The sonars detect the echo by listening for the returning wavefronts. This echo has an attack/decay envelope, which means it builds up to a peak then fades away. Depending on which wavefront is the 1st to be strong enough to be detected, which could be the 1st, 2nd or even 3rd, the result can jitter by this much. Another effect which limits accuracy is a phasing effect where the echo is not coming from a point source. Take a wall for example, the ping will bounce off the wall and return to the sonar. The wall is large, however, and there will be reflections from a large area, with reflections from the outside being slightly behind the central reflection. It is the sum of all reflections which the sensor sees which can be either strengthened or weakened by phasing effects. If the echo is weakened then it may be the following wavefront which is detected - resulting in 8.65mm of jitter. It is possible to see changes of distance as small as mm but then get cm of jitter.

Customer: "In the spec there is only the operational temperature of the ultrasonic sensor itself. What are the min and max temperatures to use the complete module?"

ROBOT ELECTRONICS is a brand by English manufacturer Devantech Ltd., based in Norfolk. Product range comprises sensors, in particular ultrasonic or compass, servocontrollers as well as small robot drive systems or relay modules with various interfaces. Sensors are produced in England and are of consistently high quality.